The Tremoflo is an Airwave Oscillometry System (AOS) that allows fast and simple respiratory assessment of large and small airway function. It enables faster, more reliable, more available and more precise diagnostic and monitoring of respiratory functions. Instead of relying on complex and exhausting breathing patterns, oscillometry tests are performed with the patient’s tidal breathing. 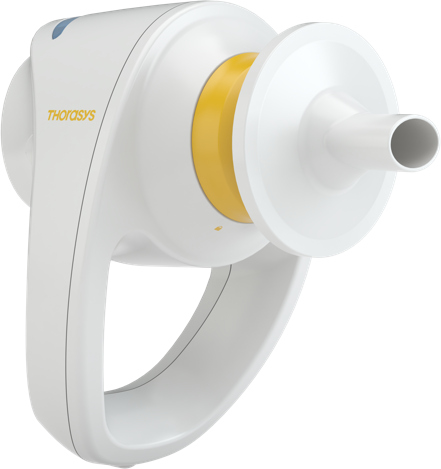 Better than the standard of care

Despite the wide acceptance of spirometry in clinical usage, there are a number of obstacles and shortcomings surrounding its use for patient assessment and diagnosis. Oscillometry, in contrast, assesses the patient’s pulmonary function during quiet, tidal breathing with no patient effort required, by superimposing a gentle, multi-frequency oscillation on top of the patient’s natural breathing.

Obstructive pulmonary diseases including asthma and COPD are increasingly recognized to originate in the “small airways” (i.e., those airways with a diameter of less than 2 mm). Early obstructions in these peripheral airways are often not measurable by spirometry and therefore risk going undetected.1 In contrast, oscillometry has been shown to be sensitive to changes in the small airways.2 Consequently, oscillometry provides unique and valuable information regarding peripheral lung function over and above Spirometry, which translates into better patient outcomes.2 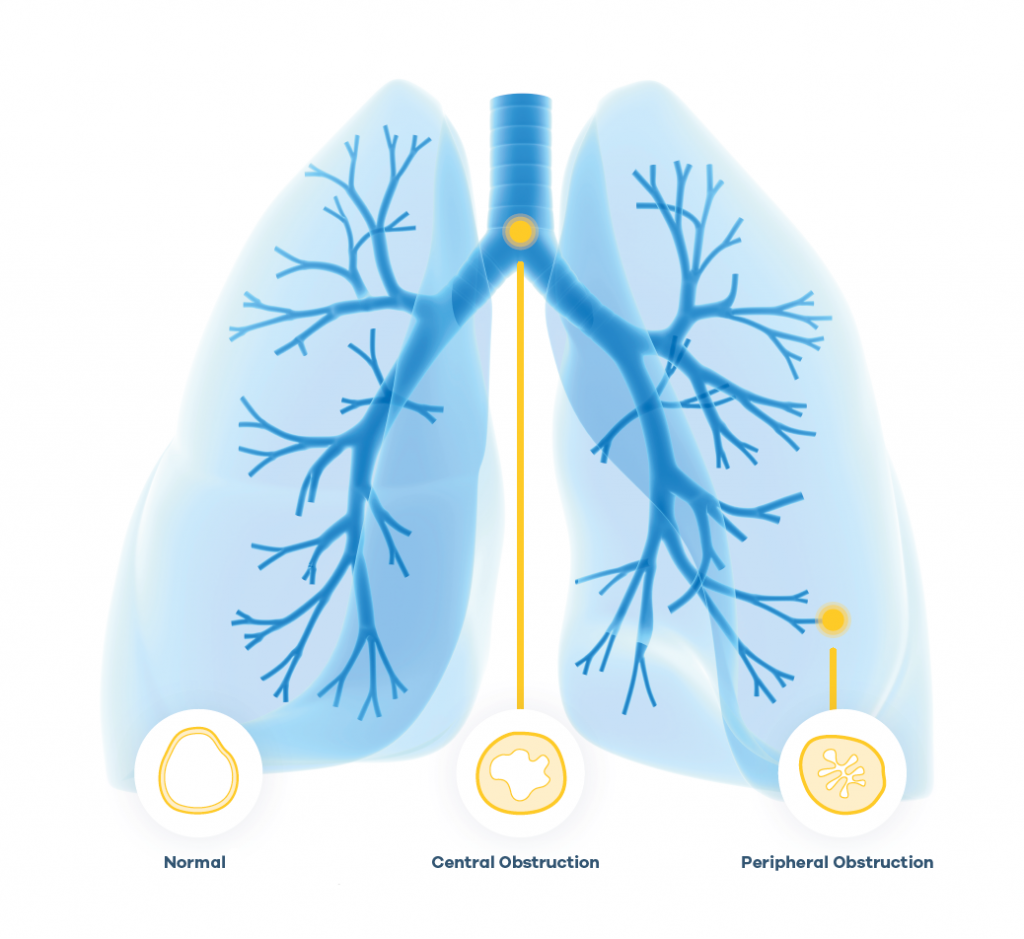 A Solution for All Patients

Anecdotal evidence from numerous clinicians reveals that even for COPD patients for whom spirometry is not explicitly contraindicated, the test is stressful and exhausting. A typical geriatric spirometry test can last 30 minutes.  Successful spirometry depends on patient cooperation and maximal effort, therefore the success of a test is severely jeopardized in patients who have difficulty in understanding and following instructions, including young children.

In contrast, oscillometry was shown in a study to be successful in nearly 100% of school aged children and in 70-80% of older pre-schoolers.3 In another study comparing oscillometry and spirometry in patients 65 and older, all were capable of producing a valid oscillometry test whereas valid spirometry was completed in only 33.4% of the participants.4 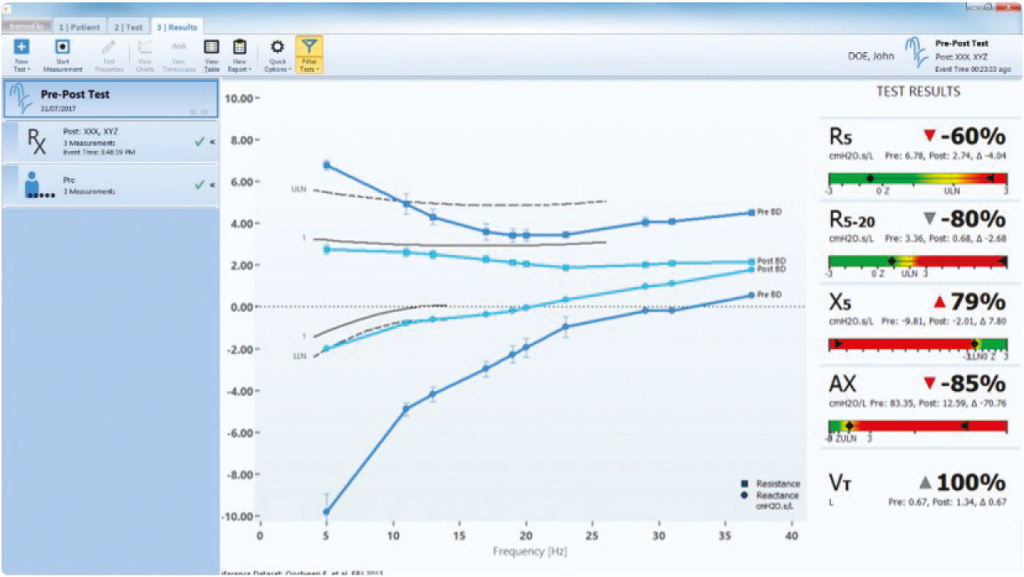 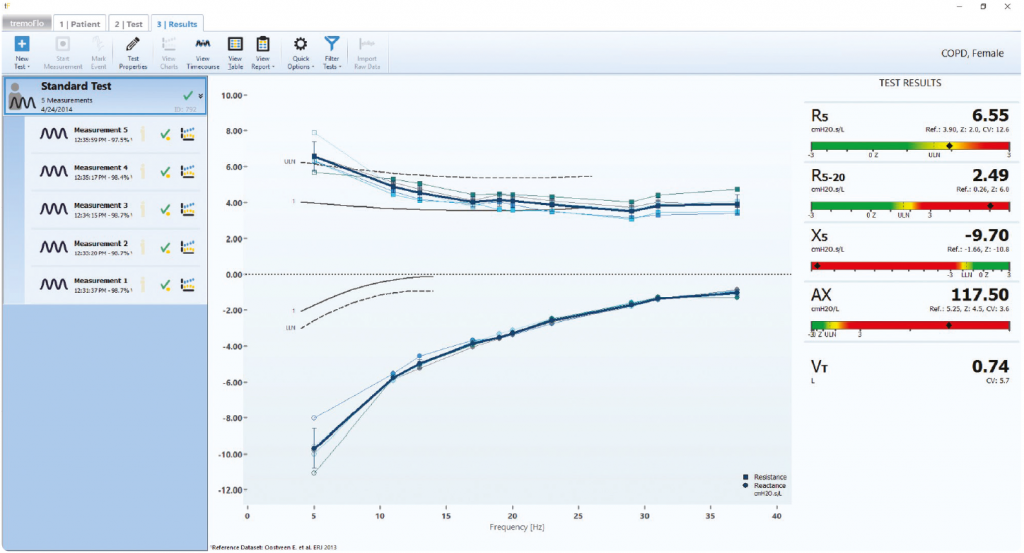 In contrast, common practice in oscillometry is to report the deviation of the patient’s value from given normative data based on the patient’s particular demographic information. The tremoflo software, in particular, plots patient values on clearly labelled green-yellow-red gauge scales that visually indicate the patient’s deviation from normal, or z-score. 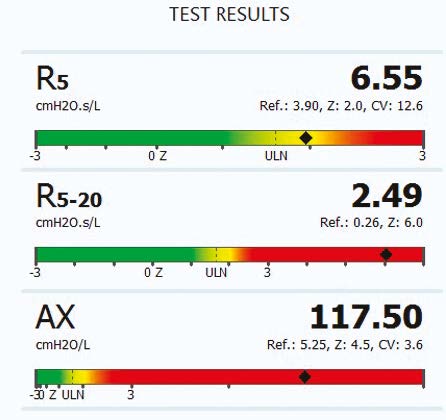